Male pattern baldness is a common condition affecting about 50% of the male population worldwide. It is referred to as loss from scalp and is mostly hormonal, that is why it is also called as androgenic alopecia. Along with hormonal changes, a number of other factors lead to loss such as genetic and age. The hairs started getting thinner and finer until no more growth and already present hairs starts falling. A normal life cycle is divided into three stages; anagen which is the phase during which a these grow during which the roots are dividing rapidly, catagen in which the active growth ends and the telogen phase in which these fall. The normal time duration for anagen phase is 2-8 years, catagen phase is 2-3 weeks and telogen phase is almost 3 months. It starts when the time duration of telogen phase is increased due to various factors and it results in the pattern baldness in male. 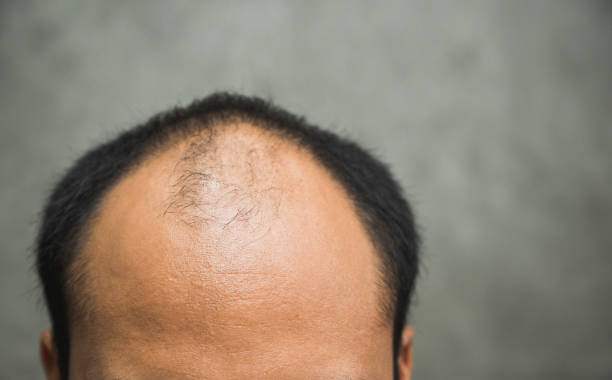 Losing hair is a normal procedure and everyone experiences it throughout their lives however male pattern baldness starts when this loss is intense and the fallen hairs don’t grow back as in normal cases. One of the major factor contributing towards this condition is the hormone named as dihydrotestosterone, DHT, which is endogenous androgen sex steroid and hormone. Basically this hormone is responsible for development of male sex characters such as formation of male genitalia. Body produces this hormone from testosterone. However, if a person is genetically sensitive to DHT, it binds to receptors in the roots or bulbs and results in shrinking and weakening. This process is known as miniaturization and it eventually leads to complete end of growth. An interesting fact about DHT hormone is that it plays a role in the development of hairs in other areas of the body like chest and overall body; which means that on one side it is responsible for the loss from the scalp whereas on other side it is responsible for hair formation and development of male character which is the hairs on all over the body. Male pattern baldness due to androgenic cause can be treated by the use of DHT blocking shampoos or sprays which prevents the binding of receptors by this hormone and prevents follicle for the process of miniaturization.

Another cause is due to stress. There are a number of ways by which stress can affect the body. Some of the conditions in which the stress can cause shedding include telogen effluvium in which the hairs are pushed to a resting stage in which they don’t produce new strands. As the time passes, these strands become easily breakable during performing slight functions as in combing or by merely touching. It usually occurs as a result of poor nutrition or might be hormonal imbalances during stress. Trichotillomania is another stress related issue. It is most commonly seen in young teenagers who tend the urgency to pull out their hairs in negative emotional conditions like anxiety. Treatment of stress related problem can be treated by meditation therapy, consulting to a psychiatrist, using antidepressants and learning various ways to lower the stress. There are a number of activities by which stressing out can be prevented. As the main cause is stress in this case, it can be prevented by eliminating factors contributing to stress instead of using procedures to increase growth.

Genetics play a major role in case of Andorenetic Alopecia. This can be justified by a condition known as alopecia areata. It is an immune condition in which the immune system starts targeting body’s own hair due to which they start falling out. It might only cause thinning in some cases while in other, bald spots may develop. The genetics of baldness is very complicated. AR gene is a gene that is responsible for the coding of androgen receptor protein which forms androgen receptors in the scalp. These are the receptors, as discussed above, which binds with the DHT hormone, causing the thinning and breaking of hairs. The AR gene is present on X chromosome which comes from the mother but further details illustrate the fact that they eventually came from maternal grandfather to mother to child. This genetic flow makes the genetics of hair loss even more complicated and difficult to predict whether a person will bald or not. Further studies have confirmed that problem can occur as a result of genes from any side of parents; that is both father and mother have equal chances of delivering AR gene to the child.

There are other health conditions that can lead to male pattern baldness which include thyroid diseases, secondary syphilis and iron deficiency anemia. Sometimes a scalp biopsy is necessary to detect the cause of alopecia. Many medicines may cause thinning in susceptible individuals while remain harmless in other. Cancer treatment such as chemotherapy or direct prolonged interaction with rays can cause alopecia. Keratin protein is the building block of follicles and its deficiency can lead to diffuse hair loss. Tinea capitis is a condition in which the hairs are lost a result of fungus infection in scalp. This can be treated by using topical antifungal agents. High fever, surgery or severe illness also causes falling out . Several medicines are being approved by FDA to treat hair loss which include: Minoxidil, Finasteride and some prostaglandin analogs. One should use them after consulting a dermatologist. Several surgical procedures such as Follicular Unit Extraction and Follicular Unit Transplantation, slit grafting and punch grafting can be used to treat this condition permanently. The efficacy of these procedures is determined after testing a person as a good candidate for them or not and this is done by several specific testing methods. Male hair loss, though common, is easily treatable and preventable. There are many best hair transplant clinics in Lahore where professional and expert doctors will help you.

Why does male pattern exist?

It exists due to genetics, age and hormone.  There are various changes in the life cycle and the same is true with hormonal changes or imbalance. As a result of male hormone imbalance, Androgenetic Alopecia exists.

Can you stop male pattern baldness?

At the moment there is no permanent cure to stop it. There are two medicines the FDA has approved to delay hair fall. These medicines are Minoxidil and Finasteride. As you stop use of these medicines, hair fall starts again.

Is baldness from the mother or father side?

Baldness genes come from both the mother and father side.

Why does it happen?

It is due to genetics, aging process and hormonal changes or imbalance.