Frontal Mid Scalp Crown  hair transplant in Lahore Pakistan is being practiced if donor area allow. It is a very important baldness treatment from which patients can get better younger looks again. The people who want to get rid of their bald looks can practice this technique because of its significant results. Before moving further, it is necessary to mention the aspects behind it. Scalp is the anatomical area enclosed by the human face from front side, and by the neck at the sides and back. Frontal region is the area people usually talk about when they mention a receding hairline. This specific region is also called the “forelock” or “central forelock”. It is the section of your follicles that contains front and center of your head. It consists of the hairline and the follicles around your temples. This is one of the first places where one might notice some changes, when someone is losing hair due to male pattern baldness. Frontal Mid Scalp Crown hair transplant is people’s best choice because they can get a brief description about skull area, where they want their follicles to be planted. 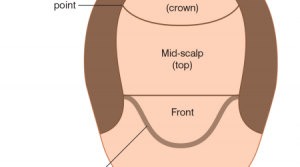 Frontal-Mid Scalp and Crown Area hair transplant can be best understood by the portions of the skull. Now, the mid-scalp region is the middle portion of your skull. If someone is not at a late stage of male pattern baldness, he is likely not experiencing much baldness here. Here a question arises: where does both of these regions start on the skull? It can be best understood by sketching a line that runs across the top of your head and connects your temples. Here is the border of your skull is. Most of the people are already familiar with the next portion of the skull. Here we have also mentioned it with a brief description so that the whole skull area is covered in this article. That next specific term is Crown. It is the highest point on your skull, toward the back of your head. It is also sometimes called the vertex. The more you learn about baldness, the more you’ll see this specific term used. Frontal-Mid Scalp and Crown Area Hair restoration give effective results, no matter which portion of your head are affected by baldness.

Frontal-Mid Scalp and Crown Area hair transplant can be done by many methods. FUE (Follicular Unit Extraction) is a modern technique and is preferred over other conventional methods, which for the first time took place in 1990s.This technique is much advance and beneficial for the patients as it includes the use of thin needles, instead of a scalpel as used in the past in other methods. This method started gaining much importance since early 2000s and now it becomes preferable over other methods. In this method which is a highly proven and invasive outpatient procedure, follicular unit grafts containing a small number of follicles are individually removed from the donor’s stronger areas of scalp and with great care reinstated to the recipient’s bald areas. It is very relaxed and even method for the patients as the donor areas heal in just a few days due to the fact behind it, there are no scars and stitches. The physicians all over the world use this method for the recreation of permanent and natural looking result. Firstly, the donor’s genetically stronger areas are identified and prepared for removing follicular units then by using tweezers like instrument a tiny circular incision is formed and then individual units are removed from the donor’s scalp. Each unit graft is arranged into 1 to 4 follicles in number and based on the loss pattern, doctors map out the adjustment and placement of each follicular unit group on specific regions of the skull. Frontal-Mid Scalp and Crown Area hair transplant is done in order to give the most natural looking results.

Frontal-Mid Scalp and Crown Area hair transplant has a significant success rate. It is almost 92 to 98 % and the outcomes are long lasting and there will be no fear of baldness again for many years. The cost of this technique in Pakistan ranges from 50,000 to 5,00,000 and it depends on how much hairs are being transplanted on these regions of skull and also on the choice of specialists.

Who is the best specialist for frontal mid scalp and crown hair transplant in Lahore Pakistan?

Dr. Ahmad Chaudhry is the best doctor who can perform frontal , mid scalp and crown area by taking hair from the scalp donor area and body in a single procedure which may consist of two or three days.